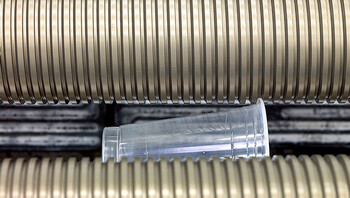 Marbach has implemented a new production process for the manufacture of rim-rolling screws for drinking cups. In the conventional process, rim-rolling screws were turned which limited flexibility concerning the contour. This flexibility however can be increased significantly through the milling process Marbach uses. With it, Marbach fulfils its motto “the right solution for every requirement” once more.

Thomas Reinhardt, Head of Sales at Marbach: “During the thermoforming process of cups, a sharp edge often occurs at the edge trim. This edge is unwanted for drinking cups as it is located where the lips touch the cup. In order to exclude the risk of injuries, these edges are rounded in a subsequent process, the so called rim-rolling.”

The rim contour varies from cup to cup, from brand to brand. That’s why a custom fitting rim-rolling screw trio has to be produced for almost every drinking cup. So far, Marbach hasn't had this product in its portfolio so the customers have had to procure the rim-rolling screws separately from other suppliers. This has led to mistakes, because the ordered rim-rolling screws haven't always fitted optimally to the thermoformed cups.

Conventionally, rim-rolling screws are produced through the production process of turning. Steps and edges can occur during this forming process. These often result in increased dust formation as well as unclean or scratched edges.

Marbach however mills the rim-rolling screws completely in 3D on a special processing machine. Stepless, in highest precision and surface quality. Every conceivable free formed contour can be replicated. Thanks to this production process, starting and final contours can be freely chosen. Also special contours are possible. Marbach rim-rolling screws can be produced with steel or aluminum.

Because Marbach offers both the thermoforming tool as well as the rim-rolling screws from a one provider, customers can be sure that these two parts are perfectly compatible with each other. And that they achieve a perfect result at the end of the process. The flexibility of the contour increases through the milling process and the customers get the right solution according to their requirements.

Thomas Reinhardt: “The first rim-rolling screws have already been implemented at our customers. The feedback is very positive. We will quickly accelerate the development of this market, because we see an enormous advantage for our customers.”

Marbach has recently expanded its production capacity in Poland. In addition to two already established plants in Tarnowskie Góry and Kielce, another plant in Poznan has become part of the globally active Marbach Group since September 2019.

More than just cutting-dies for packaging.

Marbach is known for its manufacture of tools for the production of packaging. What is less well known is that Marbach also offers high-precision tools for a wide range of technical requirements.

Marbach has responded to the increasing demand for its die-cutting platen cleaning device by launching a revised version into the market. With this, it is now possible to clean machines where previously the Marbach machine could not be used due to lack of space.