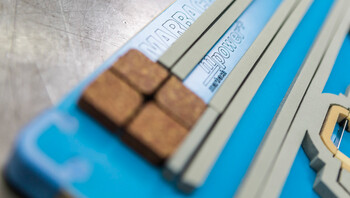 Marbach launched mpower on the market in 1996. This revolutionary technology became the market standard in the following years and this year celebrates its 25th anniversary.

In 1996, Marbach launched a completely new technology on the market under the name mpower. This caused quite a sensation at that time.

Bernhard Reisser: "The heart of the mpower technology is a new cutting rule generation: the mpower cutting rule. This has a rounded cutting edge tip that compensates for height tolerances, significantly reduces angel hair, and is almost completely unaffected by overpressure. In combination with other components such as special processing and assembly techniques as well as the so-called zone levelling, mpower has ensured more productivity in die-cutting then as now: Through significantly reduced make-ready times as well as an increase in process reliability due to the very good quality of the blanks."

But Marbach would not be Marbach if they had not further developed the mpower technology through the years. The result of this ongoing development is the mpower+ technology.

Reisser continues: "With the mpower+ package, we have updated the mpower cutting rule as well as the associated components. In addition to the cutting rule itself, mpower+ includes a laser cutting process developed specifically for this technology, a particular assembly technique, special rubbering, and the specification of the calculated entry and final punching force. For our customers, this eliminates the need to slowly discover the optimal punching pressure. This means that our customers not only save time during the knife setup itself, but also during the run-in of the tool. They can therefore produce more jobs per day, save on expensive machine downtimes and also gain added flexibility."

mpower stands for reduced make-ready times and productivity in the die-cutting process. And has done so for 25 years.