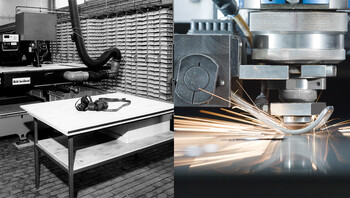 In our soon 100-year history, we can look back on many outstanding innovations and groundbreaking decisions. One of the most important decisions in our history was to invest in laser technology in the early 70s.

As recently as the 1960s, the manufacture of a cutting-die was a purely manual activity: marking out the contours on a plywood sheet, sawing the contours using a scroll saw, bending to the correct contour and fitting the rule material using simple jigs and fixtures. In the process, the tolerances of the individual production steps added up, so that the quality of the tools produced was not very high. However, the demands of the packaging industry were increasing at that time, especially due to the rapid development in packaging machines with ever higher performance data.

Marketing Manager Tina Dost: "Karl Marbach Junior was well aware of this situation of increasing quality demands on cutting-dies. In 1969, he attended a lecture in Great Britain about ''cutting with light'', a new, revolutionary technology. The speaker was Ray Miller, President of Atlas Steel Rule Dies. At that time, Miller had the world's first CO2 laser system for cutting-die production in operation at his company in the USA. In 1970, Karl Marbach flew to the USA to see Ray Miller's laser system in action. From this time on, he became fascinated by this technology. He couldn't get the idea of his mind to use such a cutting system for diemaking in Heilbronn, Germany. And so Karl Marbach dared to make the investment. Even though the financial risks were high and no reliable empirical values were available. In 1972, the time had come: the first CO2 laser system for diemaking in Europe was set up in Heilbronn in a purpose-built annex. This decision would subsequently prove to be the right one. Because the use of laser technology for the production of cutting-dies would become a cornerstone of the success of the Marbach Group. With the help of this technology, a previously unimaginable productivity was achieved: In a very short time, many more cutting-dies could be produced than with the conventional, manual production method. In addition, the use of laser technology enabled a new tool quality which was not only unique on the market, but which simply delighted the customers. As a result, Marbach no longer only supplied customers in Germany but also abroad. There, the Marbach tools with their extraordinary quality met with great interest just as quickly as they had done in Germany. The result: More and more customers ordered cutting-dies "made by Marbach". Marbach had become the market leader in Europe. The foundation stone for the success story of the family-owned company was thus laid."

As a result, the decision to use laser technology became the most important milestone in Marbach's company history. 1,500 employees currently work for us at 20 locations worldwide. And laser technology has become an indispensable part of today's die production. In the Marbach Group alone, 40 laser systems with a total power of 86,000 watts are in operation, 7 of these laser systems are located at the headquarter in Heilbronn.

So, Marbach was the first company to introduce laser technology for the production of cutting-dies in Europe and has thus played a major pioneering role in shaping the packaging market.

Our division Marbach Die Supplies not only supplies materials and equipment for packaging manufacturers, but also entire in-house dieshop concepts including the required equipment.

We are well-known for our extensive portfolio. Thus, we also supply the global plastics industry with cutting-dies. The high-precision Marbach steel rule dies are designed for use directly after the thermoforming process. Here they ensure the reliable separation of plastic cups and lids.

Marbach Die Supplies not only supplies materials, but also machines for cutting-die production. One machine that stands for the highest efficiency in diemaking is the mjet|1. This compact waterjet machine cuts the ejector rubber for a cutting-die automatically and with absolute precision.

With our blanking tool alublanker, we feature a tool in our portfolio that has managed to convince numerous customers. This is because the alublanker is not only characterized by its low weight, but also by its high productivity.

The alublanker is a high-precision blanking tool lower part, made completely from one piece and in one milling operation. The separating grid is made of aluminum and is completely CNC milled.