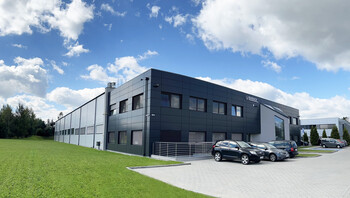 Our Polish site, celebrates its 25th anniversary this year. Since 1997, Marbach has been manufacturing thermoforming tools, assemblies and components for the plastics industry at its site in Tarnowskie Gory.

Markus Britsch, Managing Director of the Marbach Werkzeugbau Group: "Since its founding in 1997, the site in Poland has grown continuously. In the first years, production was still carried out in a rented building. After some time, to be able to meet the steadily increasing demand in the Polish market, expansion of production capacity became inevitable. As a result, in 2007 the company moved into its own new premises. Due to yet more continuing growth, an expansion of these production capacities also became necessary. Therefore, investment in a new production and office building in Tarnowskie Gory followed, which became operational in November 2021. As a result, production capacity has been doubled, and processes and material flow have also been further optimized. Currently, Marbach Budowa Form employs around 80 people in a production area of 2,500 m². "

Britsch continued, "In Poland 25 years ago, we started with one customer. Since then, we have been gradually developing the Polish market as well as those of neighboring countries. At the same time, the product and service portfolio has also been steadily expanded. Today, we design and produce thermoforming tools, stacks and tool components as well as assemblies and components for a wide range of applications at our site in Tarnowskie Gory."

For almost 10 years, we have been offering a very special, dimensionally stable dieboard under the name "Marbach solidplate". Now this tool is available in a new aluminum version which, due to its low weight, demonstrates all its advantages especially for large folding box formats.

Donations instead of gifts.

We once again this year follow a long established company tradition: We donate to different aid projects at Christmas under the motto "Donations instead of gifts".

We have some very special technologies for the tobacco sector in our portfolio: The crease-plate-die|+ and crease-plate-die|rc not only ensure productivity during die-cutting, but also during the subsequent packaging process.

The top seller among counter plates.

Our division Marbach Die Supplies has a comprehensive portfolio of materials for diemakers. This is also true for counter plates: Here, we supply individual solutions from simple creasing matrixes to cutting plates for the production of steel counter plates. However, the top seller for counter plates among us has been the same for some years: rillma+.