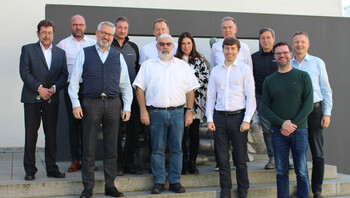 Silvio Gruber, who has been responsible for the corrugated board division at Marbach, has gone into well-earned retirement shortly before Christmas. Until his recent retirement, Mr. Gruber worked for Marbach in various management positions for a period of 37 years.

Peter Marbach, Owner & Managing Director at Marbach: "Silvio Gruber has worked for Marbach for a large part of his professional career. With his work, throughout several decades, he has contributed to the success of the company. When Mr. Gruber joined us, our corrugated board sales amounted to 1 million German Marks. Over the years we have expanded steadily. Today, our worldwide sales in the corrugated board product area total more than 30 million euros."

Silvio Gruber's professional career began as an apprentice toolmaker. After completing his 2-year military service, Mr. Gruber began working in this profession and took a master class as well as further training in the then brand-new technology of eroding. After various stops along the way, Mr. Gruber joined Marbach in 1984. Initially applying for the thermoforming division, things turned out differently than expected for him, since Marbach was looking for a successor for Mr. Walter Kübler, who was responsible for the corrugated board rotation division at that time. And so, when he joined Marbach, Mr. Gruber already had very good prospects. After taking over the rotary division, various leading positions followed for him at Marbach in the flat and rotary corrugated board division, both as product group manager and in sales. In 2010, Mr. Gruber was given power of attorney.

Mr. Gruber's work at Marbach can be seen in the changes to the production of rotary dies: At the beginning of his work, the production of a rotary die was purely manual work: The packaging layout was applied to the rotary die by pencil drawing and then sawed by hand with a special jigsaw. Later, the manufacturing process became more and more automated: First, the pencil drawing was replaced by a plotter drawing, which was glued onto the rotary half shell, then a controlled saw was used. Today, the packaging layouts for rotary half-shells are cut by laser. However, there are current and future changes happening in this area as well: In order to contribute to environmental protection, Marbach is increasingly using milling technology instead of laser cutting. This is because the energy efficiency of milling is much higher than that of laser cutting and the CO2 emissions are significantly lower.

Peter Marbach: "We would like to thank Mr. Gruber for his tireless commitment to the Marbach company and wish him good health and all the best for the future."