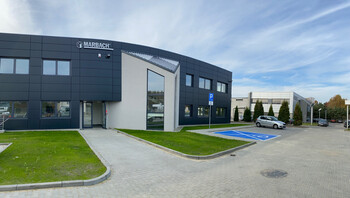 Marbach, is globally positioned and possesses 20 subsidiaries worldwide. One of them is located in Tarnowsky Gory, Poland. There, Marbach has doubled its production capacity in recent months.

Since 2009, Marbach Budowa Form SP.Z.o.o. (thermoforming tools) and Marbach Polska SP.Z.o.o. (cutting-dies) were housed under one roof at Marbach's location at Tarnowsky Gory. At that time, a new building was necessary in order to be able to cover increasing demand from the Polish market. After expansion in 2014, the building, occupied since 2009, was bursting at the seams again. This made an expansion of the production area essential. With increasing sales and needing to continue to supply customers with quality tools as usual, Marbach urgently had to expand its production capacities. Therefore, investments were made in a new building.

Managing Director Marbach Werkzeugbau, Markus Britsch: "The continuously increasing demand for tools and components has required an expansion of the production capacities at the Tarnowsky Gory location. So, a second production and office building was built directly next to the already existing building. Twice as much space is now therefore available for both tool manufacturing and die-cutting. After just under a year of construction, the time has come: the new building is now ready and will be occupied by the tool manufacturing department in November 2021. In this context, we have also further optimized processes and material flow. The site in Tarnowsky Gory now employs more than 180 people with the two thermoforming and cutting-die divisions."

In addition to the Tarnowsky Gory location, the Marbach Group has two other sites in Poland.