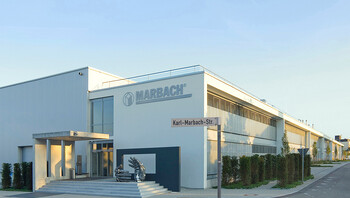 The foundation for this opportunity had already been laid in the year 2005. At that time the street adjoining the company building had been officially renamed “Karl-Marbach-Straße”. This had taken place in a festive ceremony led by the then Mayor of the city of Heilbronn, Helmut Himmelsbach, who presented the new street sign. The renaming was to honor the exceptional achievements of Karl Marbach.

The company address wasn't changed at that time in order to avoid the complex changes that would have been required.

Marbach has now decided to take this step. With the birthday of Karl Marbach – who would have celebrated his 90th birthday on 30th of March – the company has found the fitting occasion for the address change. And this because Karl Marbach had so strongly characterized the company group personally as well as entrepreneurially during his more than five decades as managing director.

Owner and Managing Director Peter Marbach: “With immediate effect both companies at the headquarters in Heilbronn – Marbach die-cutting technology (Karl Marbach GmbH & Co. KG) and tool manufacturing (Marbach Werkzeugbau GmbH) – are to be reached under the same postal address. The street change means for us on the one hand extensive organizational effort. On the other hand, we have the advantage that in the future both companies will now be administered under one business address. In addition, for us it is delightful that the street, in which our company buildings are located, bears the same name as my father Karl Marbach. He led the company over many years with such visionary force and zest.”

The change of Marbach’s postal address has already been made. Customers, suppliers and the general public have been informed.

For three years now, Marbach has been one of the few diemakers to operate a die-cutting machine at its site in Heilbronn. The Eterna machine (formerly Brausse) is used for customer and employee training, for tests of in-house developments and also for customer projects with well-known brand owners. In July this year, Marbach and Eterna can look back on 3 years of successful cooperation.

In 2019 the Marbach Group opened another subsidiary of Marbach America in Michigan City, Indiana. Today - 10 months later - the new Marbach family member is well on its way to becoming a strong pillar of the globally active company group.

Marbach is offering a special tool for the quick set-up of embossing plates on embossing dies under the name Embossing Register System IV. With this tool users save time when setting up an embossing die and so reduce machine downtimes.