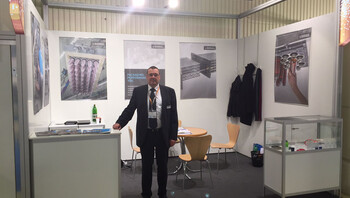 Marbach exhibited this year once again with huge success at the Interplastica trade fair in Moscow. This international exhibition for plastics and rubber took place between the 24th and 27th January 2017 at the Expo Center in Moscow.

MT|easy speed
Primarily, Marbach showcased to the visitors in Russia its new tool MT|easy speed. Its special design provides significantly higher cycle numbers, with a life span extended 3-fold and a tool weight that is reduced by 33%.

T-IML
The visitors were also informed in detail about the topic T-IML (thermoform in-mould labeling) by the Marbach booth team on-site. Marbach Head of Sales Hubert Kittelmann: “Enhancement of plastic packaging plays an ever increasing role. Top selling packaging is not only characterized by its functionality, but especially by its attractive appearance. The Marbach T-IML technology allows integration of in-mould labelling with the thermoforming process. And so in this way optimally refines the packaging.”

Steel-rule tools
Marbach reveals a whole new level of forming and trimming with its steel-rule tools. These SR tools, that are produced in-house at Marbach cutting-die manufacturing, are characterized by their individuality and quality. Technologies such as the Flexi-Tab-System or the cutting rule Silverline 23.8 provide exactly the quality Marbach customers expect from a cutting-die. A modular system allows the customers to compile a tool package that meets their requirements perfectly. For all those unwilling to miss out on Marbach quality even with short runs, Marbach recommends the 'smart' version The 'performance' option is however the right choice for customers that have made production performance their top priority. And for all those customers with highest demands concerning the tool and its life span, and that are willing to invest in the future, they should choose 'performance+'.

Kittelmann: “The Interplastica was once again a huge success for us. Our new technologies have generated a lot of interest among the visitors. We are looking forward to the upcoming projects.

Marbach has developed a new bottom pin unit including special high precision lower pins which has been successfully used by the first customers. With a bottom pin unit, waste is safely stripped during the production of packaging. Customer Establecimento Grafico Impresores from Argentina is enthusiastic about the performance of the new Marbach product.

Marbach has been working at full speed to up its website for the upcoming drupa 2020 and give it a design relaunch. Even though drupa will not take place until 2021, the company does not want to withhold the new website from its customers.

Marbach Die Supplies & Automation (MDS&A) has become one of the major cutting-die material distributors in Germany. With its new rotary cutting rule for corrugated board, the mhard|r+, Marbach has launched a rule that is very robust and ensures best cutting results.