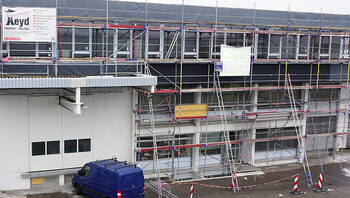 Extension of the headquarter Heilbronn.

Marbach has extended a building at its headquarters in Heilbronn. Shortly after the new building at the subsidiary in Poland had been opened, structural expansion within the company group continued. Another story was added to an existing building in Heilbronn.

Marketing Manager Tina Dost: ‘‘Our spatial situation worsened in 2015/2016. Through our strong company growth, we had to create additional room capacity. The idea: adding another story to an existing building should provide this additional space. The extension will be completed at the beginning of 2017. In the future the Purchasing, Accounting and Human Resources departments will be re-located in over 300 m².’’

Marbach has developed a new bottom pin unit including special high precision lower pins which has been successfully used by the first customers. With a bottom pin unit, waste is safely stripped during the production of packaging. Customer Establecimento Grafico Impresores from Argentina is enthusiastic about the performance of the new Marbach product.

Marbach has been working at full speed to up its website for the upcoming drupa 2020 and give it a design relaunch. Even though drupa will not take place until 2021, the company does not want to withhold the new website from its customers.

Marbach Die Supplies & Automation (MDS&A) has become one of the major cutting-die material distributors in Germany. With its new rotary cutting rule for corrugated board, the mhard|r+, Marbach has launched a rule that is very robust and ensures best cutting results.