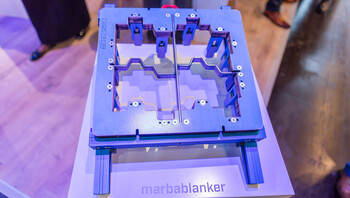 What remains half a year after drupa 2016. Rückblick auf die drupa in Düsseldorf.

The drupa 2016 started on the 31st of May in Düsseldorf. Half a year has passed since then. It’s time for an interim appraisal at the Marbach Group. The world leader in die-cutting technology was on-site with a 143 m² booth. And presented not only its newest technologies. But much more. The trade fair visitors experienced the new Marbach corporate design live. With a modern exhibition concept. New image movie. User-friendly Website. And a reference book for its customers that was published just in time for drupa: the Marbach Magalog, a mixture of magazine and catalog.

Review is preview.
Marketing Manager Tina Dost: “Already shortly after the trade fair, it was clear to us that this was the most successful drupa since our first participation in the 70s.” Marbach was able to welcome more than 2.000 people during 11 exhibition days at the booth. Among these were numerous existing customers but also many new international contacts. Innovative solutions were presented and new projects initiated through interesting discussions with visitors on-site. Dost: “The trade fair follow-up work is as important to us as the exhibition itself. That’s why our sales network started already during the drupa with full power follow-up.”

Longterm success.
The résumé of the last months after drupa: Our trade fair innovations have become bestsellers. “Especially the digital zone leveling and the new blanking technologies, lightblanker and marbablanker, have kept production running at full steam at Marbach,” Dost explains. Half a year after the exhibition, already almost 100 digital zone leveling packages have been sold. At drupa, the product was only offered in 106 format. Due to high demand, Marbach has increased its efforts in the meantime. The zone levelling is now also available in 76 and – brand new – in the big 145 format. Dost continues: “The customers that already work with the technology are excited. By the simple handling as well as by the time they save when patching-up.”

The blanking sales have increased by 25% compared to last year. This is, most likely, due to the fact that automatic blanking is worthwhile with the lightblanker whereas formerly the blanks had to be separated manually.

Full speed ahead.
The drupa wasn’t the only trade fair for Marbach in 2016. Besides the FachPack, the biggest trade fair for the thermoforming part of the company, the K in Düsseldorf, was just around the corner in October. Dost: “2016 was our mega exhibition year. We simultaneously launched our new corporate design. That was a lot of work. But now is not the time to ease up. We want to harness the success of 2016 and so look forward to the next drupa.” This will take place in 2020. “I’m sure we won’t be bored until then. We want to always offer our customers the best solutions for their requirements. And for that reason, we develop new products nonstop. So our visitors at drupa 2020 will certainly experience many new things.

Subsidiary in Egypt celebrates its anniversary.

The Egyptian subsidiary Marbach celebrates its 25th anniversary. The Marbach Group was founded in 1923 as a 3-man business. To begin with it supplied mainly the domestic advertising and packaging industry. Marbach then began a process of internationalization in 1984. In 1995 Marbach started a joint venture in Egypt.

The Managing Partner of the Marbach Group, Peter Marbach, has donated an internal bonus to the Wartberg School.