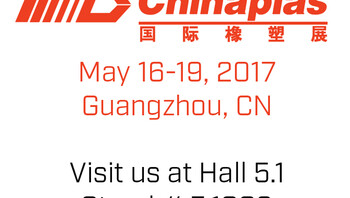 Marbach Tool Manufacturing successfully exhibited at the Chinaplas 2017 in Guangzhou (China). As part of the foreign and export promotion by the German government, Marbach was located in the German section of the Chinaplas with a small booth. All important German machine manufacturers, as well as numerous suppliers of machine parts and injection molders, were represented there.

Marbach had many different visitors at the booth on those four days. Besides existing customers various new interesting contacts could be made. Marbach Director of Sales Asia, Thomas Reinhardt: “The Chinaplas was once again a very successful event for us. Multiple tool requests are already being processed. And also projects for the next months have been initiated. We are looking forward to the next exhibition, that will take place in one year – this time in Shanghai.

Marbach has recently expanded its production capacity in Poland. In addition to two already established plants in Tarnowskie Góry and Kielce, another plant in Poznan has become part of the globally active Marbach Group since September 2019.

More than just cutting-dies for packaging.

Marbach is known for its manufacture of tools for the production of packaging. What is less well known is that Marbach also offers high-precision tools for a wide range of technical requirements.

Marbach has responded to the increasing demand for its die-cutting platen cleaning device by launching a revised version into the market. With this, it is now possible to clean machines where previously the Marbach machine could not be used due to lack of space.