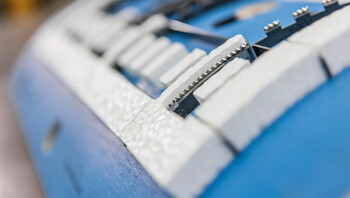 50 years of rotary tools for corrugated board. Marbach production process celebrates its anniversary.

Marbach has been manufacturing rotary tools for the corrugated board industry for 50 years. Founded in 1923, the company started producing rotary cutting-dies for corrugated board in 1968. The production process developed at Marbach became the standard in the packaging industry in the following years.

The foundation stone for the Marbach company was laid in 1923. Karl Marbach Senior founded the Marbach company together with two partners. Initially, cutting knives were manufactured for the local shoe industry. In 1926, the production of steel rules and cutting-dies, began. In the decades which followed, these flat dies were produced both for the advertising material industry and for the packaging industry.

As rotary die-cutting of corrugated board became more and more popular in the 1960s, Marbach increasingly focused on this topic. In the first rotary machines, steel was still die-cut on steel. So the counter-cutting cylinder was made of steel. But in the mid-1960s, the first rotary machines were imported from the USA to Europe and were die-cut on a soft counter part. With the machines from the USA, the 66 inch format became established for tool diameters of 487 mm. Today there are more than 50 different diameters. Managing Director Peter Marbach: "The demand for large-format outer packaging has made rotary die-cutting of corrugated board increasingly popular. That is why in 1967 and 1968 we dealt intensively with the topic of rotary die-cutting. We even moved this new production department to a separate building. This is where our innovation forge for rotary tools (a development and production center) was built. The newly developed, special production process was still very complex at that time. Involving a lot of manual work. Unlike today."

Rotary die-cutting not only permits large formats, but also high production speeds. Mr. Marbach continues: "Then as now we wanted to offer our customers the right solutions for their requirements."

In the years that followed, this process was constantly further developed. And rotary cutting-dies still continue to be an important product in the company’s extensive portfolio. Marbach offers a very special rotary cutting-die under the name marbaspeed|r. This premium tool is always equipped with the latest materials and is produced using the most modern production techniques. For example, the rubbering in the Marbach high-performance rubber flexpower ensures maximum productivity in the rotary die-cutting process. Peter Marbach: "Our rotary tools – above all the marbaspeed|r tools – stand for high productivity, zero waste and long tool life. We are very pleased that this year we can already look back on 50 years of rotary cutting-die production."

This example illustrates once again the pioneering role of the Marbach Group in die-cutting technology in recent decades.

Marbach now provides on its new Experience Hub exclusive content and information for interested parties from the packaging industry. In addition to videos, animations and digital brochures, visitors of this page can also download white papers on important industry-specific topics and make direct appointments with a Marbach contact person. Marbach specialists will answer questions via email, chat or phone.

Donations instead of presents.

Once again this year Marbach will follow in a long-established tradition: Marbach will make Christmas donations to two aid projects under the motto “donations instead of presents”. When selecting the recipients of the donations, it has been important to the Marbach Management to split the money between internationally well-known and regionally respected institutions. This year, Marbach has donated 7,000 Euro to "Help - Hilfe zur Selbsthilfe e.V." and an additional donation of 3,000 Euro to the "Tafeln Heilbronn" (a food distribution charity). Due to the current pandemic situation, however, the handover of the donations was different than usual this year. One of the donations was handed over online, the other with face masks and at a distance.